With regard to the meaningful and lovely names, Muslim families have always been the naming their babies after the names of Prophets and Sahabah (Companions of Holy Prophet SallALLAHU Alayhe Wasallam). Therefore, these names have been reflecting in the Muslim society throughout the planet.

It is indeed a joyous moment in the Muslim family when parents are blessed with a child. This happiness and excitement should not be halved but be doubled by adhering to the rulings of Shariah. Not only adhere to these rulings but also there is a need to abandon the meaningless traditions, rituals, and customs which have no existence according to Islam. This is the ultimate truth that we are not made to this world, therefore, we should not imitate the traditions and customs of non-Muslims which are exclusively made to satisfy the hunger of this perishable world. Furthermore, this complete guide for a family will reveal more about Islamic Muslim Baby Names. 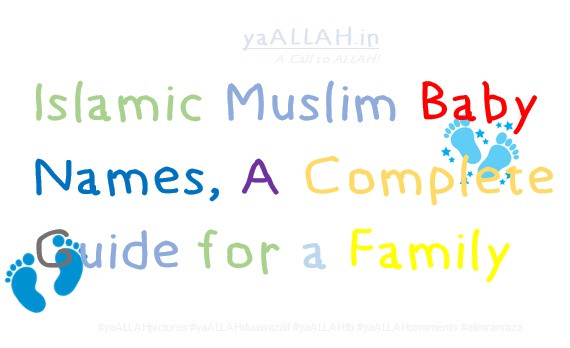 Overview About Names in Muslims

Choosing the best name for a child has always been important and somewhere critical for the entire Muslim family. As soon as a baby born, not only it’s parents but also every member starts searching names for this new member. Obviously, a breeze of joy and excitement flows throughout the home.Teachings of Islam have always motivated Muslims to keep good and meaningful names of their newborn baby. The names which we keep plays a pivotal role throughout our entire life. The name of the child is the source of their identity too. Find How to Name a Child in Islam? here.

With regard to the meaningful and lovely names, Muslim families have always been the naming their babies after the names of Prophets and Sahabah (Companions of Holy Prophet SallALLAHU Alayhe Wasallam). Therefore, these names have been reflecting in the Muslim society throughout the planet.

Few sections in Ummah are not aware of the importance of names from Quran in Islam. Moreover, they keep meaningless and modern names which never relates to the religion Islam.Sometimes, the names have no significant meaning, or not attachment, correctness and many-a-times they mean too worse to name a baby. Find Calculating Numbers to Name your Baby in Islam here.

Ignorance of Calling Names in Islam

The ignorance of naming a child in Islam, has reached at this extent of abusiveness and insults. Examples of keeping name of the child is, ‘Tahmina’, ‘Rubina’, ‘Nazli’ these are a bunch of female name in Muslim families which have no meaning at all. Want to know why? The baby name which kept ‘Naaheed’  means a woman whose breasts are fully developed. Isn’t it a shame for us to call a woman with this name. Similarly, few Muslim girl Childs are named as ‘Naailah’, huhhh..this means the calamity. Strange nah?? Beware now. There are so many Muslim boys who have the name ‘Parvaiz’, which means the name of the king of Persia, who had torn the letter of Our Beloved Prophet SallALLAHU Alayhe Wasallam. See Pyar Me Pagal Karne ka Wazifa (Tested & Tried by Thousands) here.

Calling Human with The Name of ALLAH Subhanahu Wata ‘Ala

Alas, this is really awful. Muslims are really unaware of all this. The other ignorance of naming a baby in the Muslim community is keeping the names of ALLAH Subhanahu Wata ‘Ala. These are the compound names like- ‘Abdurrahmaan’, ‘Abdurrazaaq’, ‘Abdurrab’ are often called and abbreviated as ‘Rahman’, ‘Razzaq’, ‘Rabb’. Whereas, ‘Rahman’, ‘Razzaq’, ‘Rabb’ are the beautiful Names of ALLAH Ta’ala and no human being can be called with this name. These lovely names are exclusively for HIM alone. It is not allowed for a human being to be called with these names without the prefix ‘Abd’. However, few Muslims attend this prohibition also. May ALLAH Zille Shanahu forgive our sins, Ameen. How to Read faces in Islam?

Summarily, we should not take lightly the concept of selecting the names for children. It may bring grievous results in this world and in the hereafter too.

Though, Muslims have lot of source of guidance regarding the baby names. But this has not served the purpose in details. A more comprehensive research is always needed for the Muslims of western countries. This purpose has been served beautifully by an Islamic scholar Muhammad Imran Ashraf Usmani.

What to be done after the birth of a child in Islam?

Read their own words here.

O ALLAH! I seek your protection for her and her descendants from the accursed shaytan

O ALLAH! I seek your protection for him and him descendants from the accursed shaytan

Say: He is Allah, the One and Only;

Aqiqah or First Shaving of the Head After Birth

It is masnoon (preferable) to shave the head of the newborn child which is also known as ‘Aqiqah’ (First shaving of the head). It also includes the sacrifice of an animal and to keep the best name of the new born baby on the seventh day after the birth.

When the hair of the child are shaved off, money equal to the weight of this hair shall be offered as charity (Sadaqah) to the people who are really in need of this money. Doesn’t matter inside or outside of the family. What to be Sacrificed?

The meat can be consumed by the family of newborn baby, their relatives and the poors & the needy people.

What if the Parents Can’t Afford?

If the parents of the newborn child cannot afford the two (2) or one (1) goat. They can contribute their part which is 1/7 of a cow for a baby girl, and 2/7 for a baby boy, if other partners are performing Aqiqah or their own children or performing annual sacrifice in Zulhijjah. Find Dua Weaning Child Off Breast Milk here.

Circumcision which is known as Khatnah in Islam is Sunnah of our Beloved Prophet SallALLAHU Alayhe Wasallam (preferable practice). This should be performed before the age of seven. The health of the child should also be considered before stepping towards Khatnah. Find Easy Dua to Known Hidden Things in Islam here.

It is the moral duty of the infant’s mother to breastfeed her child. The mother’s milk is the most nutritious for the child during this age. This milk also has an influence on the characteristics, habits and senses of the infant. The Zikr and Bismillah Shareef should also be recited before breastfeeding the child.

Dresses Recommended for the Child

It is not allowed for Muslim males to wear and look like women. For this reason silk, deep red colored clothes and gold jewelry should not be worn. It is the duty of the both the parents that they keep an eye on their child if they are imitating styles of disbelievers. The dress should be in honorable,descent, and modest manner. Find Amal to Get rid of Bad Dreams here.

The Holy Prophet SallALLAHU Alayhe Wasallam said: On the Day of Qiyamah you will be called by your names and the names by your fathers. Therefore, give good names (Abu Dawood).

It was the practice of The Holy Prophet SallALLAHU Alayhe Wasallam to inquire the names of the people and villages. If they were pleasant, it became apparent on his beautiful face, Subhan ALLAH. If not, His displeasure could be seen.

Let us discuss a lovely Hadith on this pleasantness and displeasantness:

Once The Holy Prophet SallALLAHU Alayhe Wasallam called for a person to milk a camel. One person volunteered;

The Holy Prophet SallALLAHU Alayhe Wasallam said to him: What is your name?

“The worst name in God’s view is that of a man who calls himself ‘king of kings’.”

Here the case is very clear. This title belongs to ALLAH alone.

The Names of Children of The Prophet SallALLAHU Alayhe Wasallam

The Names of the Scribes of the Wahi (The Divine Revelation)

To Name your child please refer to these links: